Douze or Boos game for the 2019 Eurovision Song Contest

For the first time in the history of the Eurovision Song Contest, the competing songs were revealed without the names of the performers or countries from which they came in a digital game created by us. The game surfaced on the global website and in the Eurovision app. The move received significant media attention across Europe and was given accreditation in the press for "reinventing the Eurovision."

When we met with the digital division of the Broadcasting Corporation and the European Broadcasting Union (EBU) just before the Eurovision Song Contest, we had already come up with the concept of the "Douze or Boos" game created a few weeks before the meeting. The concept was clear. The European public would hear the songs for the first time without being able to connect the songs to a country and basically to remove those prejudices we all have about each country.

We sought to create an interactive product allowing the public in Europe to listen to the Eurovision songs for the first time, with a clean moral slate and without involving politics, to choose the songs that everyone really likes.

To our delight, the European Broadcasting Union (EBU) liked the concept and as a precedent in Eurovision history, the competition songs were revealed on the website and the official Eurovision app without the names of the performers or countries from which they came in the "Douze or Boos?" game that we had developed.

A few seconds from each song could be listened to in a first-time hearing without knowing which country the song belongs to. Game-users marked the songs they really liked and only in the end could they find out which countries the songs belonged to. 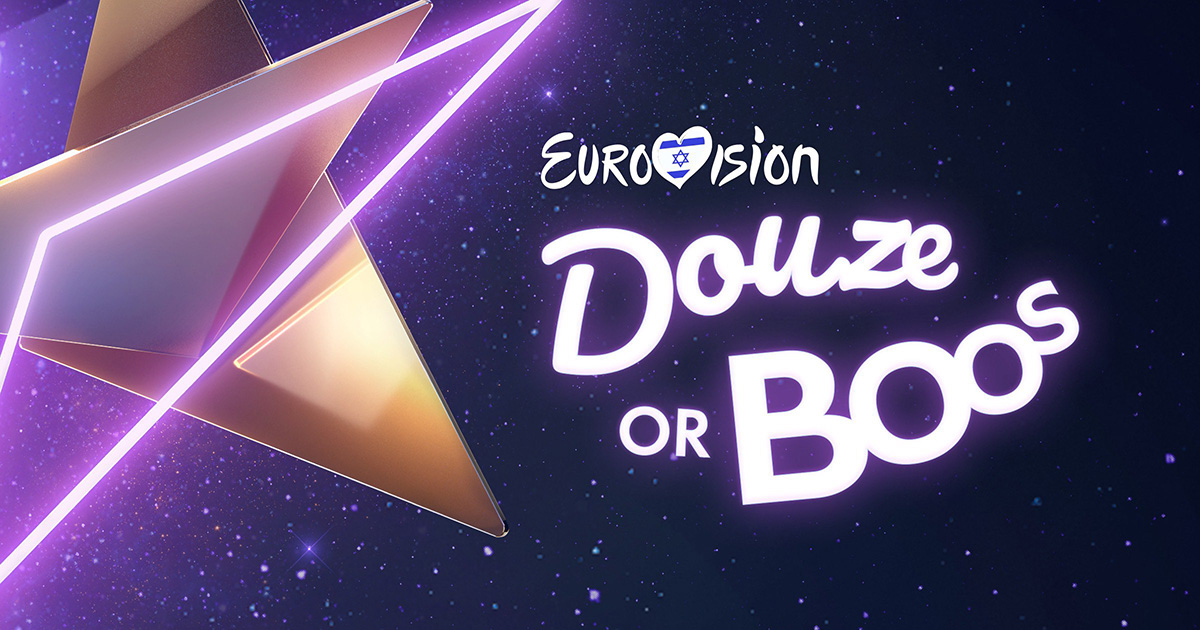 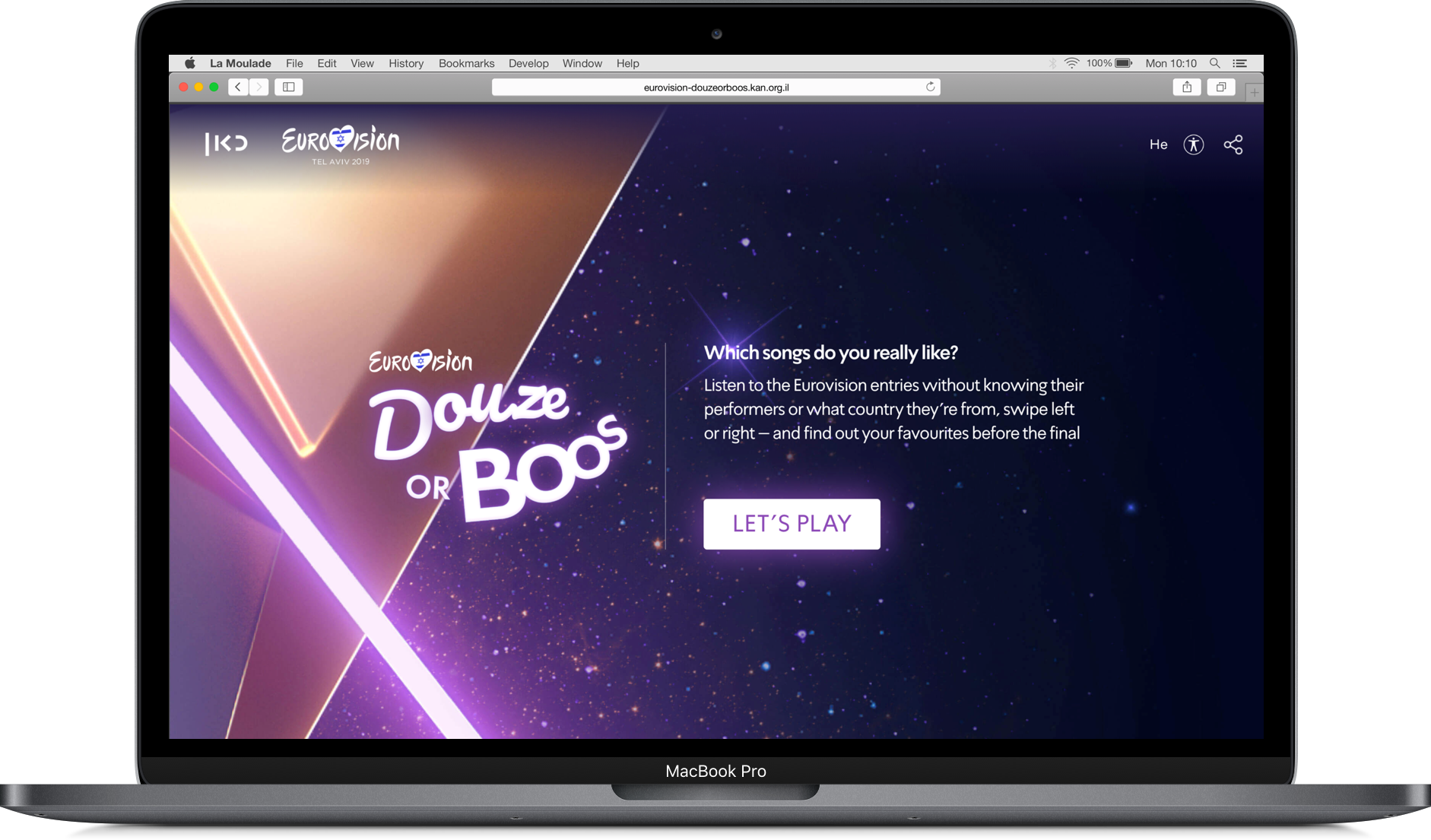 The product proved successful across Europe and this prompted us to offer EBU additional products and in fact "Douze or Boos" is the first digital product of many supplementary products we have introduced for the Eurovision event.

"We were looking for a solution that would sever the relationship between the countries and the music content itself," says Gil Rabbi, CEO of Rabbi interactive technology agency. "For we very often like or dislike the songs because of their connection to a certain country. We designed the product in a spirit of love for music, with the intention of moving away from influences such as politics, thus allowing competition fans to associate with their favorite songs without prejudice. The product we have developed enables us to truly choose the songs that everyone likes with the real advantage of all Europe hearing the songs for the first time, with the slate wiped clean."

The European Media's Reaction to the New Game

In the European media the game was given accreditation for "reinventing the Eurovision" - without knowing the country, without knowing what the performers look like - which is your favorite Eurovision song? Get to know "Douze or Boos", the new Eurovision Song Contest game that lets you select your winner by the song alone. Other headlines given to the game in the global press: "Will an Israeli development put an end to politicization of the Eurovision Song Contest?" This also led to a discourse on Israeli technology in general and not just on the specific product we developed. 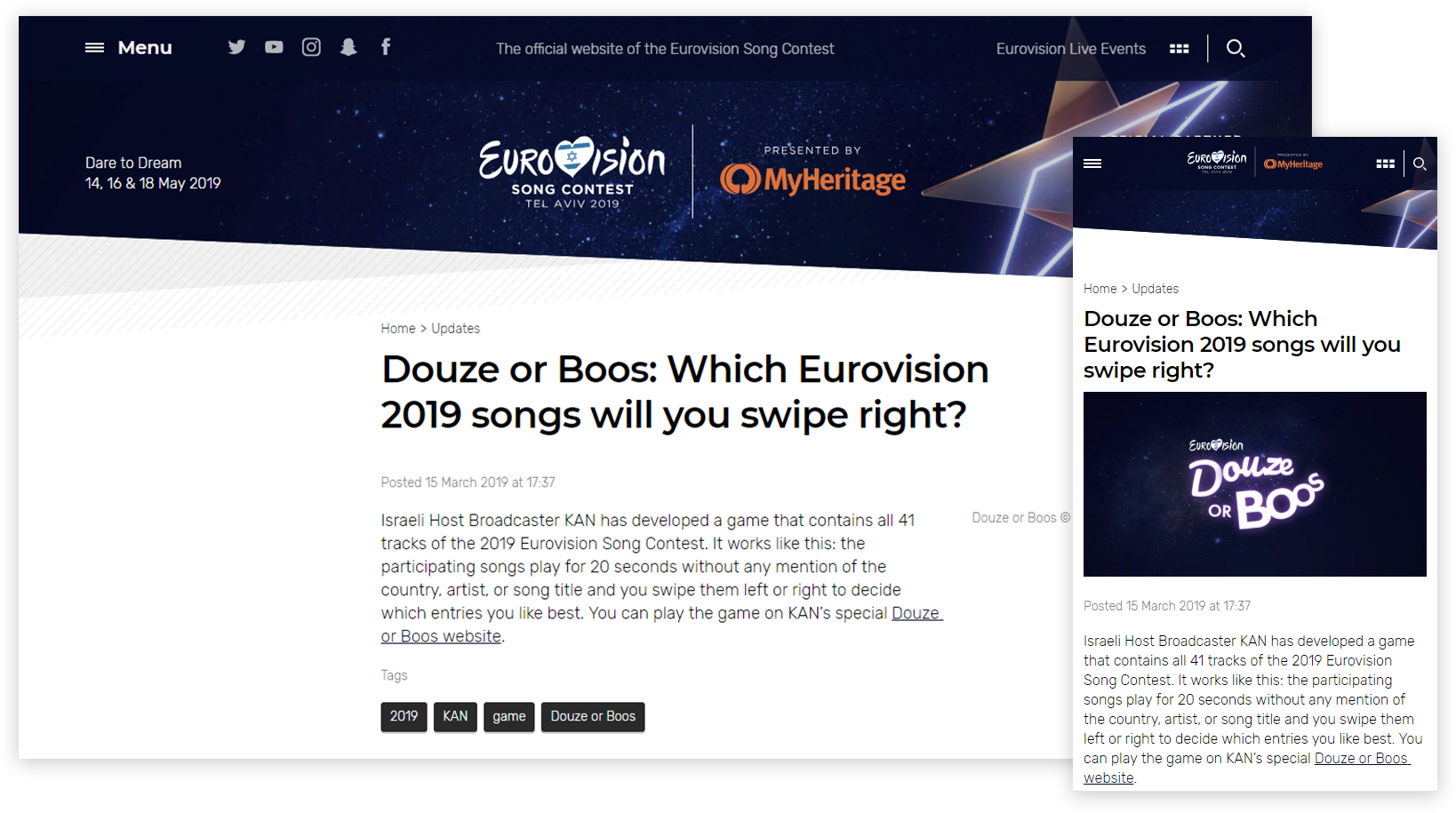 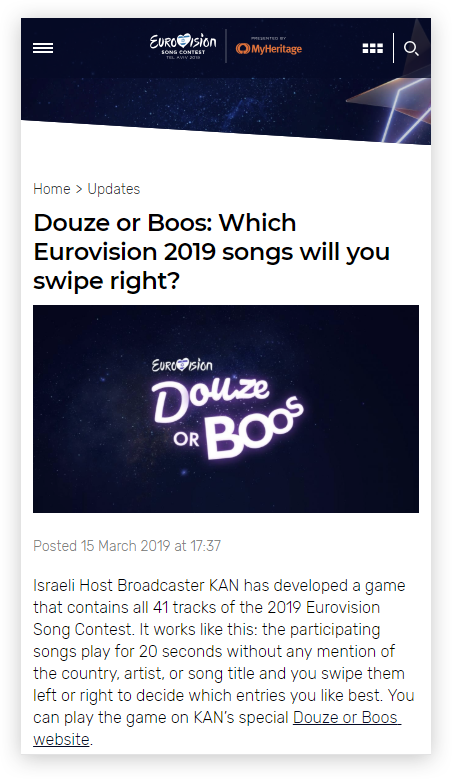 The Israeli media also covered the launch of the product and thanks to the system of statistics we developed,the Israeli Broadcasting Corporation and the European Broadcasting Union could provide attractive statistics for Eurovision reporters, including the public's preferences for songs by each country, which songs were liked the most across Europe and other information that could be of statistical value.

Douze or Boos on Israeli News

Douze or Boos on Israeli News

In order to create uniqueness and assuming that the Eurovision logo would appear frequently across the web with varying content, we created our own branding for the game while preserving the Eurovision brand's graphic language. We created a unique logo for the game called "Douze or Boos" (after "Douze Points" - the 12 points each country hopes to receive in the Eurovision) in an English version and another version for the Israeli audience. 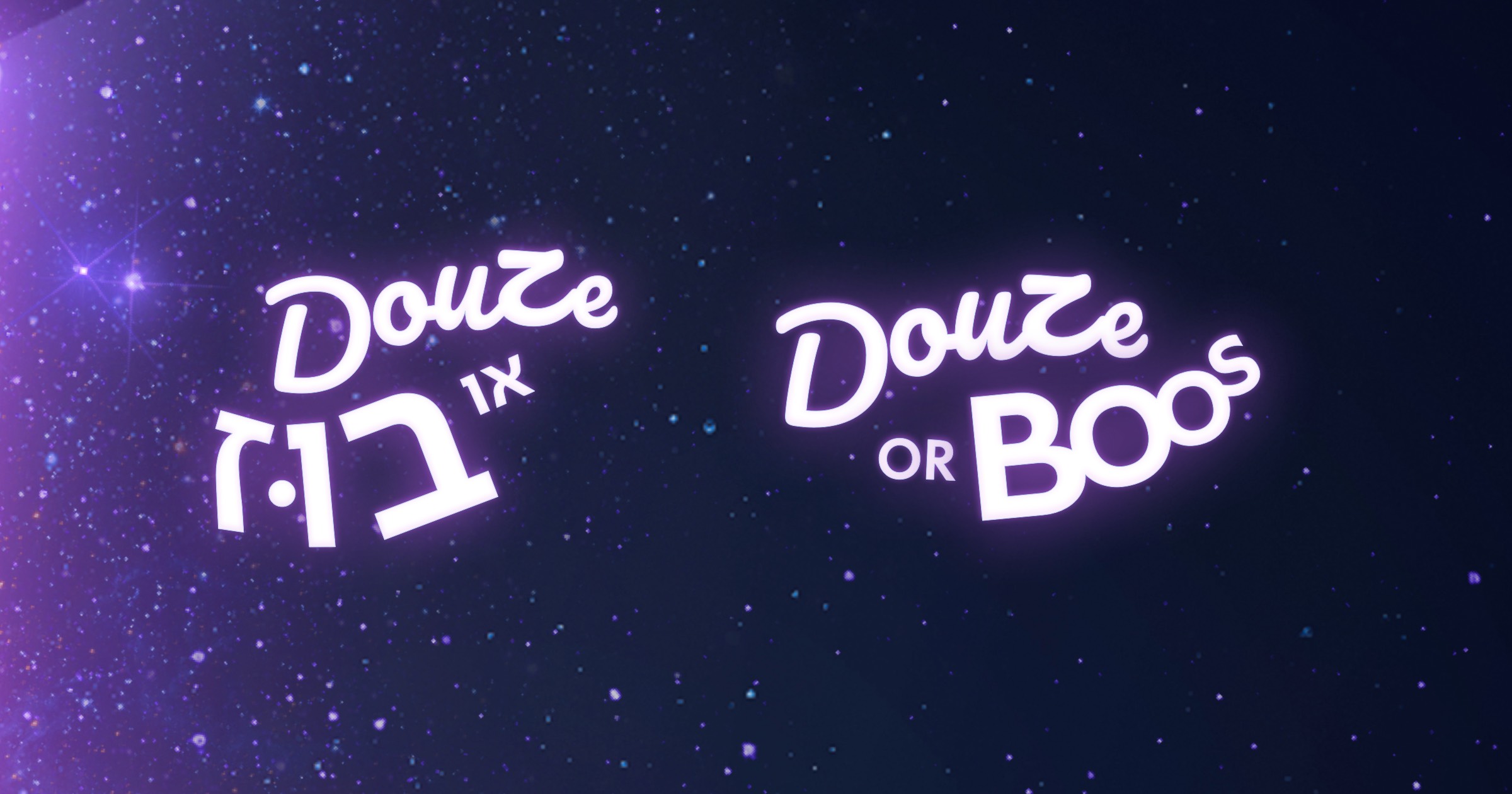 To create an enjoyable gaming experience, we created an interactive cross-platform interface for mobile phone devices, desktop and touch screen monitors and televisions. The interface presents each song on a separate tab and a stopwatch which counts backwards how long there is left to listen to a song playing in the background. The user can drag the tab to the right or left or use the buttons that we specifically designed in the spirit of Eurovision and decide whether he likes the song or not. Straight away another tab will open up from behind and start playing the next song.

The transitions between the tabs and songs include smooth sound transitions to produce the sense of continuity in the game and the tabs change at a fast pace with an animated effect. We also thought of "impatient" users who want to move on faster and can drag and skip songs at any given moment.

At the end of the game, the user is shown the list of songs he liked along with the name of the country and the performer. Basically only at the end of the game does the user realize which country each song represents. He can share his list with friends, or listen to a special Spotify playlist. 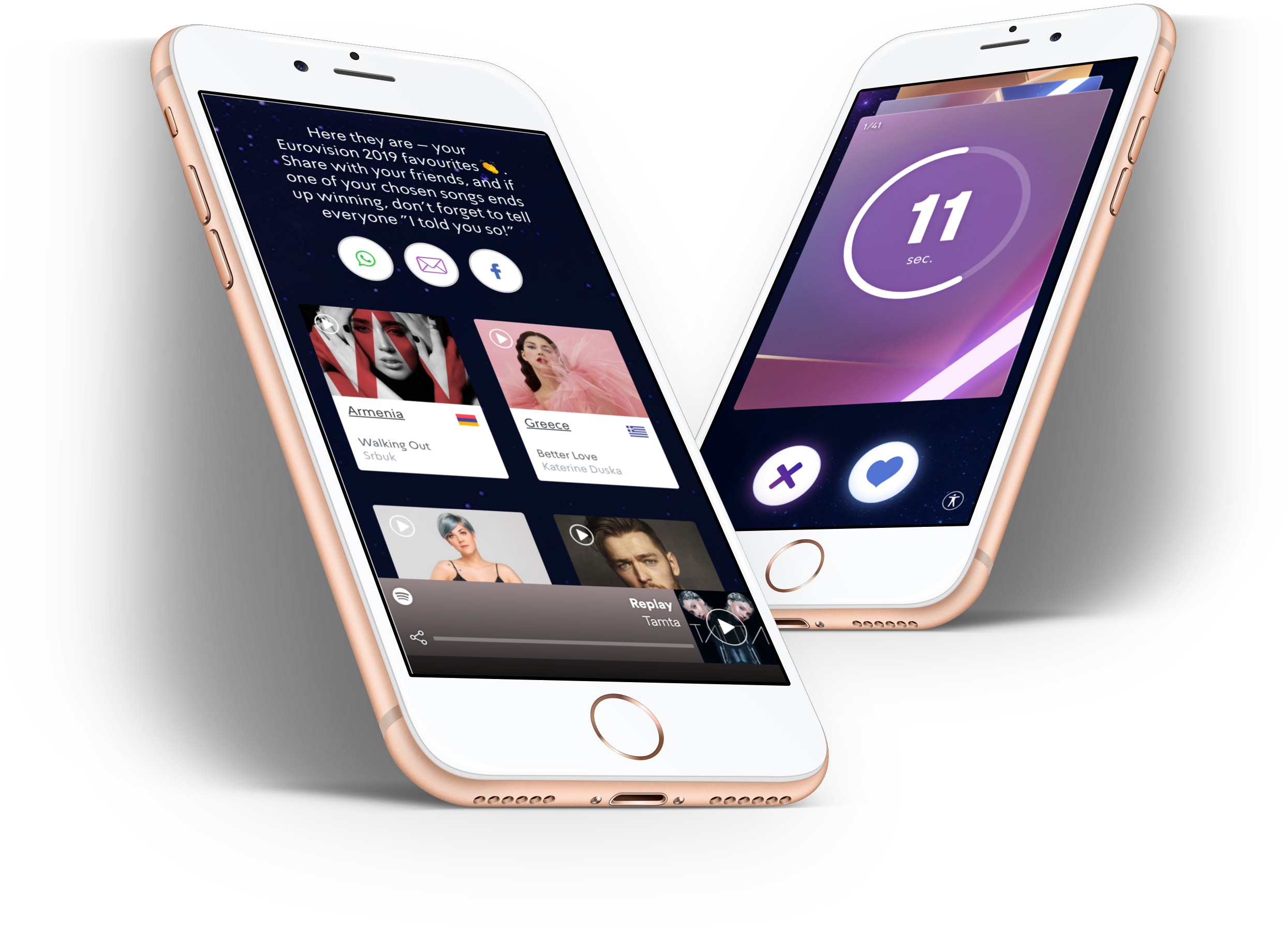 The Game on Press Conference Touch Screens and in Delegation Complexes

The product was launched at the press conference in Tel Aviv organized by the Eurovision production team for reporters from all over Europe, Eurovision supervisors and delegates of the various countries. The game was presented in addition to other content and participants of the event could play "Douze or Boos" on touch screens set up in the complex.

Other touch screens were also set up in the delegation complexes enabling the various production teams to play as well and this move led to much interest and discussion.

Assi Azar, The Host of the 2019 Eurovision Song Contest plays "Douze or Boos" at the press conference complex.

Assa Arbel, Director of the KAN TV Network's Product Department, presented the digital product at the opening of the special Eurovision Hakathon organized by KAN TV Network and the European Broadcasting Union in the Microsoft Complex. Shortly afterwards Gil Rabbi, CEO of the Company, acting as mentor during the Hakathon, presented the various challenges facing Hakathon participants. 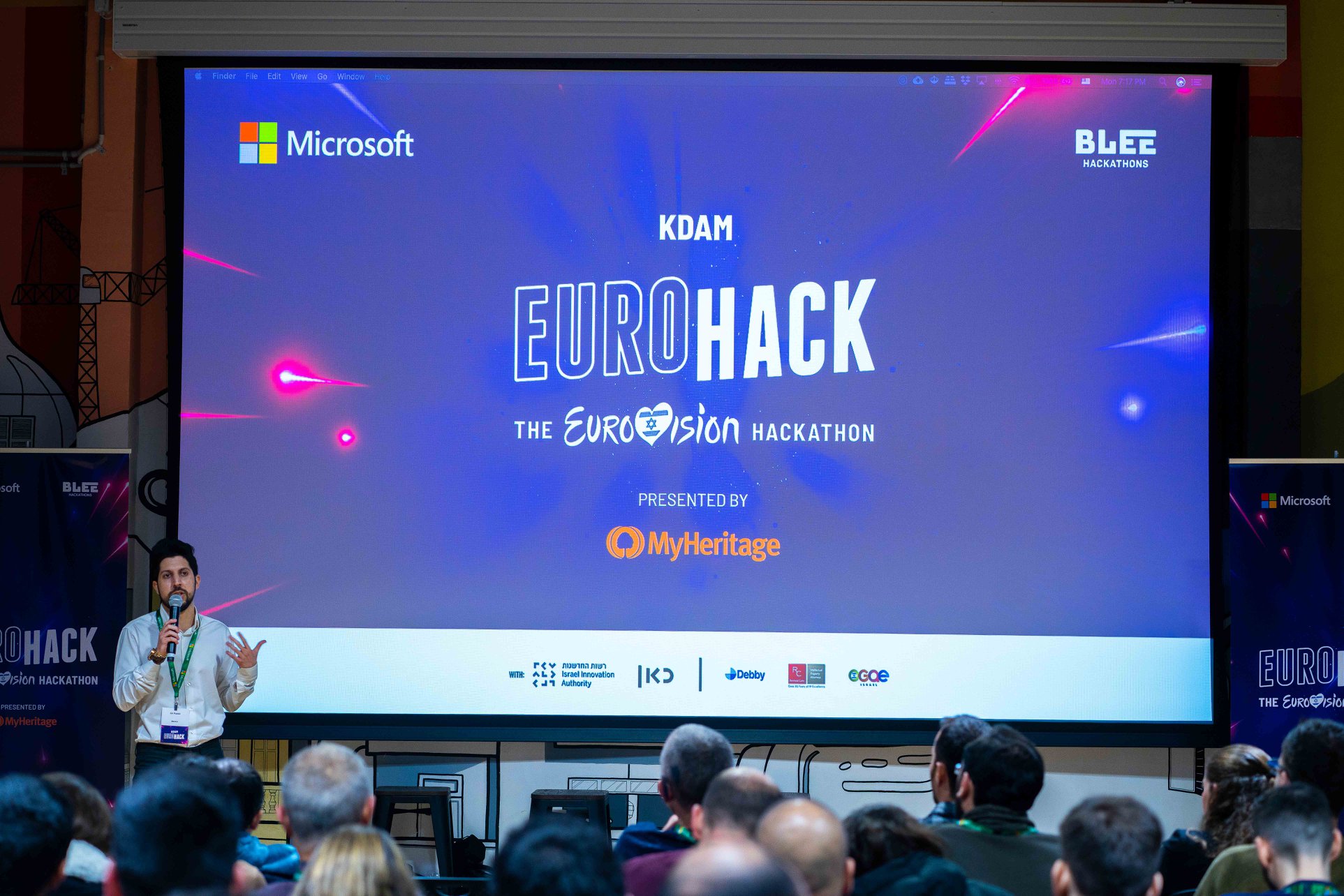 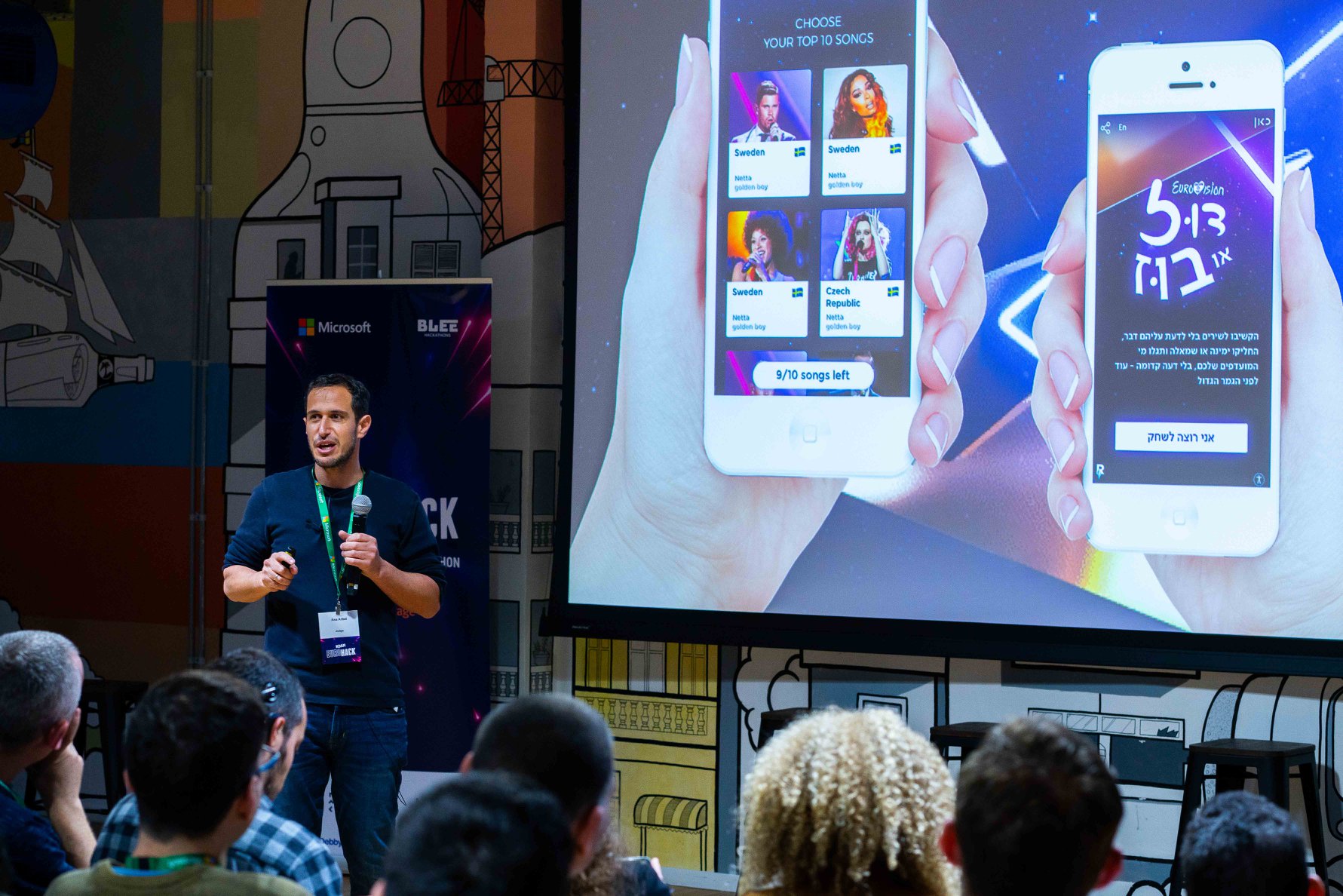 From a Beloved Television Show to a Digital Experience

"As the host broadcasting company, KAN Digital sees an excellent opportunity in the Eurovision Song Contest to launch innovative tools and features that will transform Eurovision from a beloved television show into a digital experience not seen before," explains Elad Tana, Vice President of the Digital Division. "Our activities in relation to the Eurovision also include creation of content around the competition, establishment of a Eurovision website and the operation of Eurovision platforms both at home and abroad."

The Challenge of Making the Product Accessible

As an integral part of the core values chosen by the Israeli Broadcasting Corporation and with the statement of this being "the most accessible Eurovision Song Contest ever", we were faced with a significant challenge, for unlike informational websites, in this case we were required to make a game incorporating listening to the sound with the whole experience of touch screens.

Together with a company called A-2-Z which performed a Web accessibility test and evaluation for the product we had developed, we were able to make the game fully accessible and allow full play through the keyboard or with the help of a "screen reader" for users with different disabilities.

Douze or Boos unique Logo we have created,to distinguish him from all of other Eurovision Digital products graphic language.
Rabbi Interactive Agency 2005-2021 © +972 (0)77 400-6919♦ [email protected]♦ facebook♦