The official prediction application that we developed for the European Broadcasting Association, which allowed viewers across Europe to make their Eurovision predictions.

Following the success of the first product – “Douze or Boos” – that we created for the EBU towards the Eurovision, we were determined to develop a product that would push further the audience’s experience and engagement ahead of the event. Our starting point was that even during the live broadcast, the audience already thinks they know who will win, and therefore, we have decided to develop a digital platform that would allow viewers across Europe to predict the Eurovision results.

So, how do we turn it into an exciting and interesting experience? Unlike the betting sites, in this case, we’re talking about an official Eurovision product integrated into the official app and website across Europe. The product should be designed for audiences of all ages, while we aim to make it user-friendly and compatible with all platforms, as well as enjoyable enough to create virality and continuous experience for the users.

In the course of our research, we found out that besides the betting sites that allow betting on Eurovision results, there are also other digital products that come up in smaller forums and communities, that allow the audience to “bet” on the results. Therefore, we searched for something slightly different. We noticed that all other platforms are missing any added value for the user, so we dedicated our work process to solve this issue, which proved effective and produced hundreds of thousands of prediction shares.

To encourage more people to make their predictions, we added a strip on the platform’s main screen, on which we published predictions made by Eurovision viewers across Europe, while the additional info included the viewers’ avatars and countries of residence. We found out that when users viewed the predictions and saw the final product generated by the platform, it made them curious enough to make their own prediction. 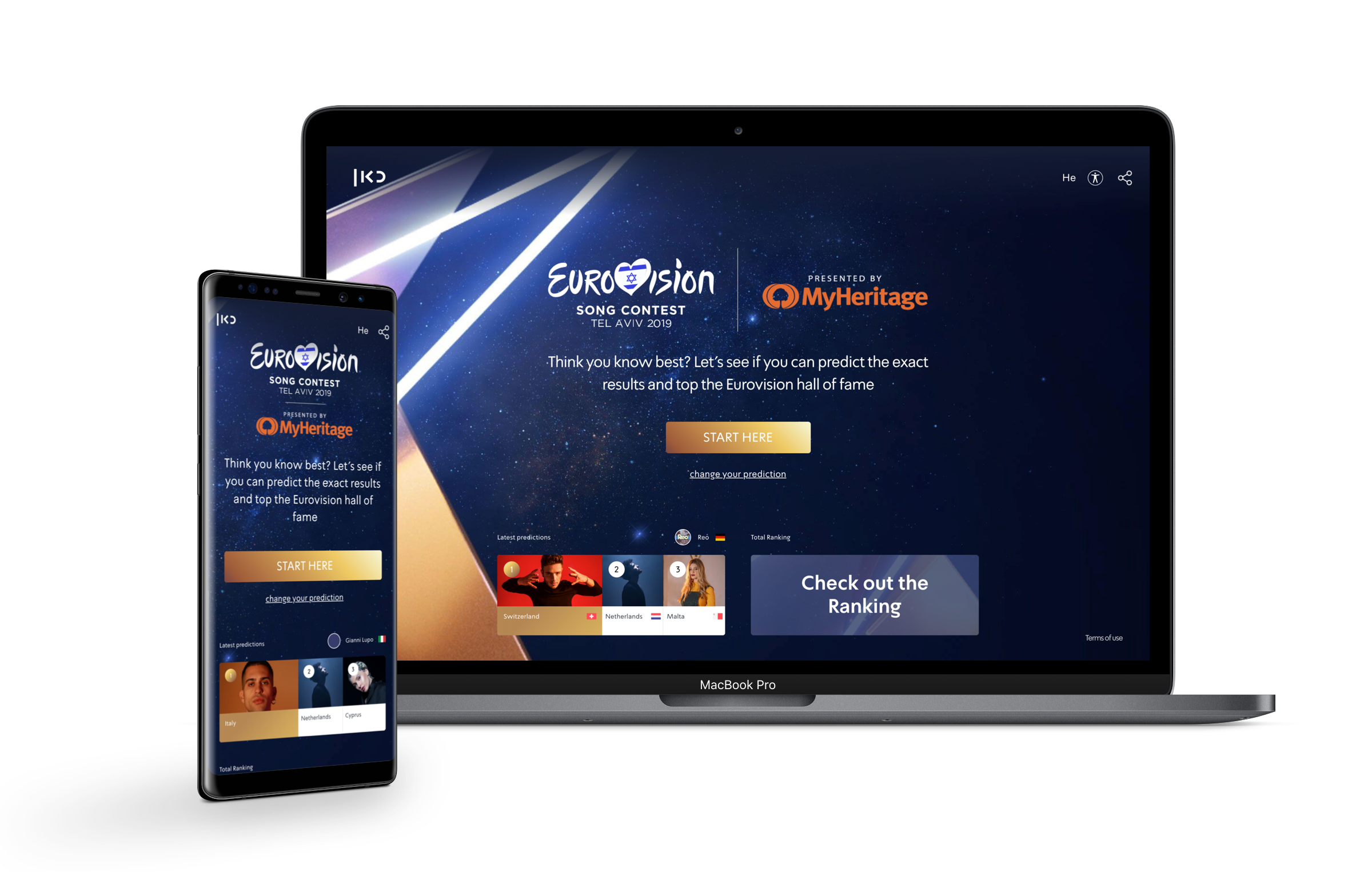 The main screen that invited users to produce their prediction

Competition value on the platform

Another value we decided to integrate into our digital product is “competitiveness”. Therefore, we created a platform that simulates competition among all Eurovision enthusiasts and allows anyone to make their own list and predict the results from 1st to 10th place. We created a smart algorithm that is able to calculate points based on each user’s prediction of the full list, and not only of the first place,  and so at the end of the event, we announced the “Eurovision experts” from all over Europe, who were able to predict the results of Eurovision 2019..

The game is shown on the Israeli news channel

The game is shown on the Israeli news channel

To make the product accessible to a large audience, in addition to user experience, we have put in a significant effort to develop a simple, user-friendly interface that allows to make a prediction quickly, and is fun to use, which raises the chances that the users will use it again towards the event, in order to update their predictions.

On the prediction screen, the user selects about 10 out of 41 Eurovision songs and places them according to the prediction of final results. To help the user create the list, each song is displayed in the interface with details specifying the singer and country. In addition, there is an option to listen to each song.

In the mobile version, we created an interface that allows the songs to be dragged easily from one place to another, and in the desktop version, in addition to using the mouse, we also enabled keyboard support to move and place the songs.

The final product in the desktop version after making a prediction

The final product in the desktop version after making a prediction

Every user who made a prediction was astonished and thrilled to see the promo generated by the interface in accordance with the user’s song selections. This is an algorithm we developed, which cuts a few seconds from each song selected by the user and creates a promo video that features short clips from the selected 1st-10th place songs.

The smooth transition between the song clips, as well as sound bites, video speed and high quality clips from each song turned the final product into a TV promo, due to which the predictions became viral on social media. At the beginning of the promo, the prediction creator’s name was displayed, along with an avatar and country of residence, showing that it is a personal prediction made by a specific user.

In addition to the option to share predictions on social media, we gave an option to embed the product, which allowed websites and content editors across Europe to integrate predictions of different people into content articles on their website or application. 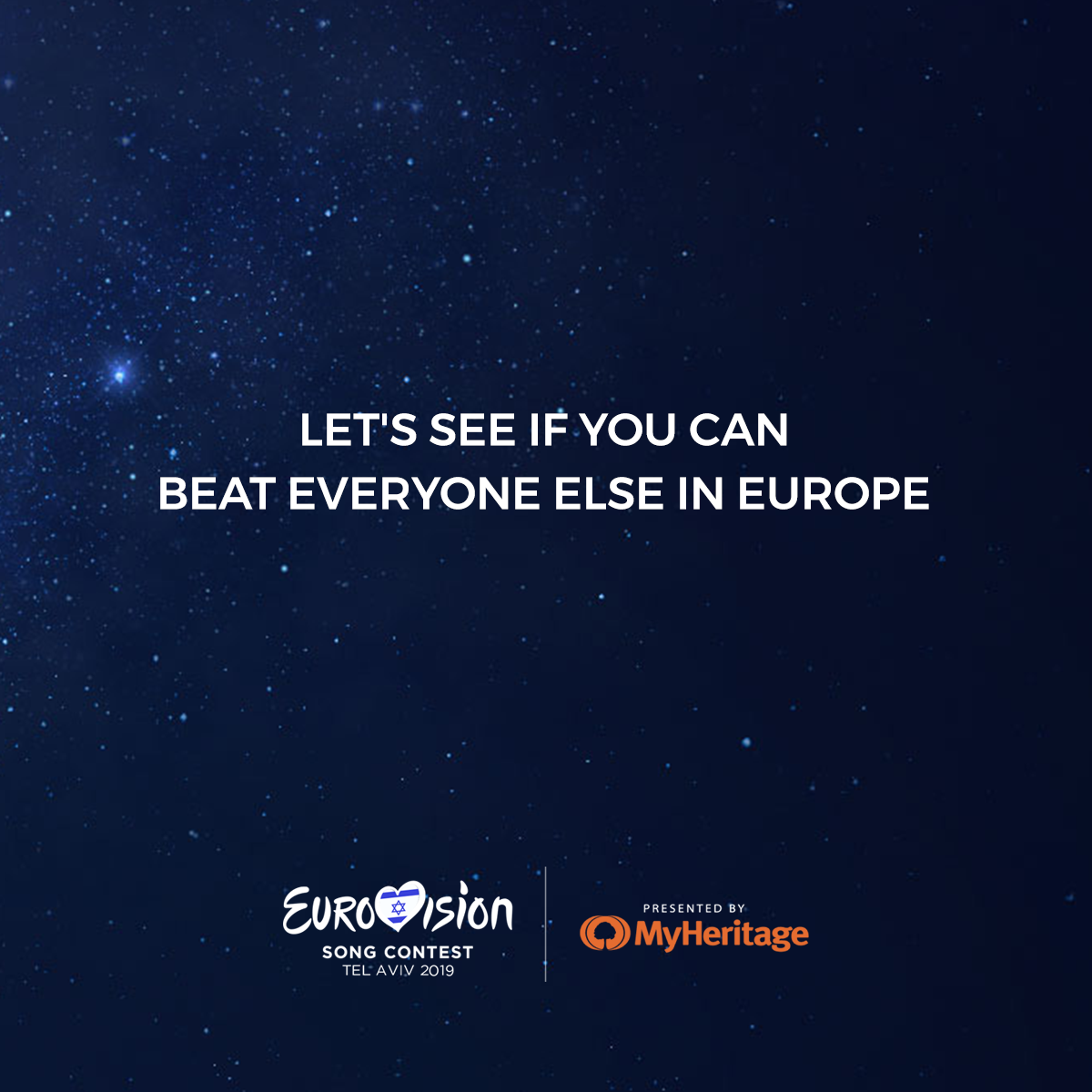 The promotional ads we created on Eurovision's official social networks

Throughout the period of activity, during which audiences across Europe were able to make predictions, we presented the average of top ten results in real time, so that everyone, and particularly the media, could follow the viewer’s sentiments ahead of the event, instead of relying solely on betting agencies that always appear in the media prior to the event. 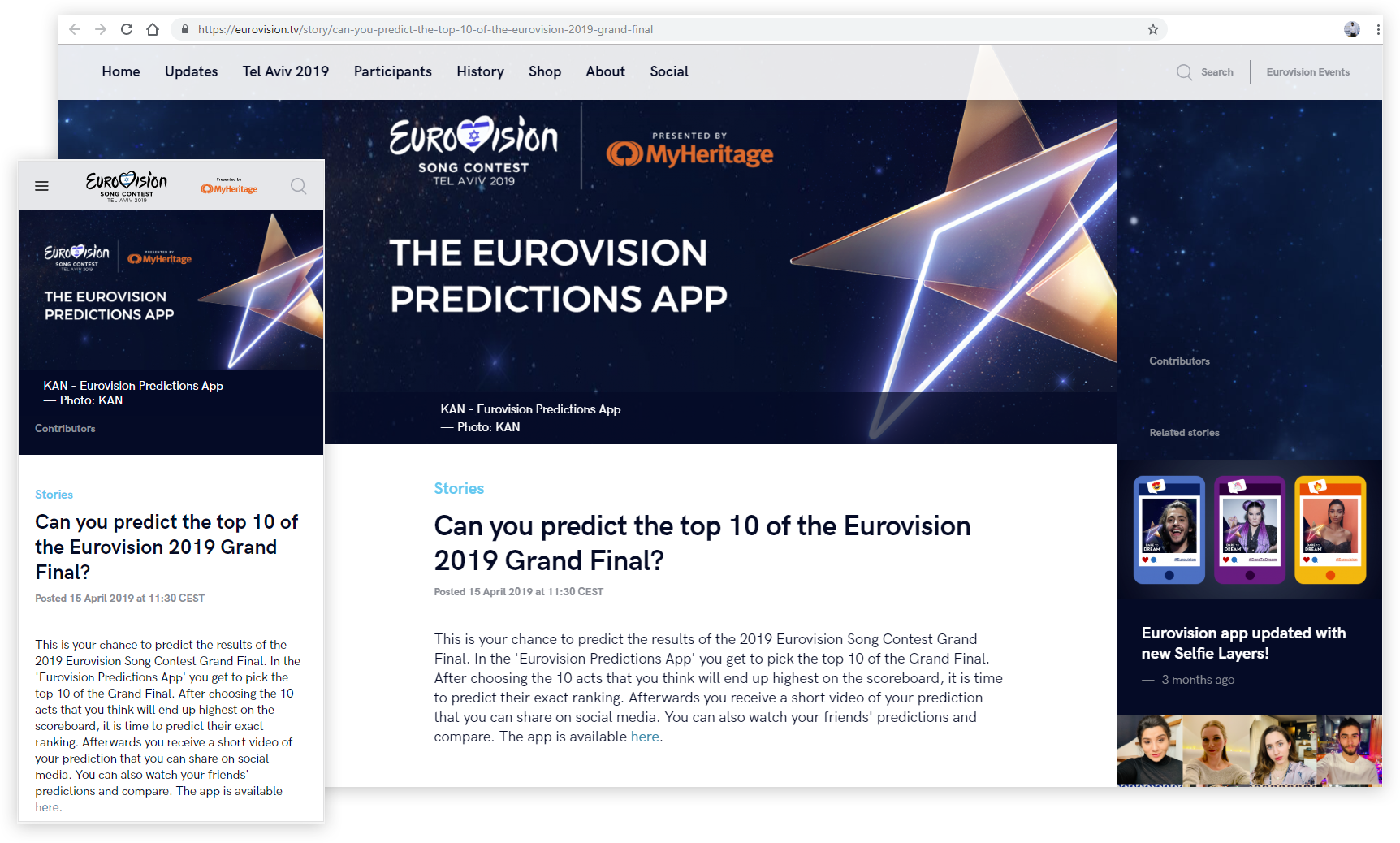 “I’m glad that both products that we designed became highly successful. This is the first time in history that the EBU has made it possible for the audience to predict the results before the event by using Eurovision’s official digital product,” says Gil Rabbi, CEO of Rabbi Interactive Agency. “It's not just about the winner. The viewers were able to make a full list of predictions and enter an international competition, at the end of which, Eurovision experts from across Europe were announced. In addition to the prediction option, the statistics interfaces showed the viewers’ sentiments prior to the event. Therefore, instead of relying on betting agencies that appeal to specific audiences, we made it possible to rely on statistics spanning a wider and more diverse audience.”

Elad Tene, VP Digital at KAN Israel Public Broadcasting Corporation: “As the hosting broadcasting body, KAN Digital considers the year leading to Eurovision a great opportunity to launch innovative tools and features that will transform Eurovision from a beloved television show into an unprecedented digital experience that Eurovision never seen before. Further to our Eurovision related activity on social media, as part of which we created content around the competition, developed the Eurovision website and other platforms appealing to the Israeli and foreign audience.”

As an integral part of the core values selected by the Israel Public Broadcasting Corporation, along with the statement to produce “the most accessible Eurovision event in history”, as part of which the broadcasts were also aimed to be made accessible for various audiences, we took upon us to make accessible our digital product and prediction platform. In collaboration with A-2-Z company, which was responsible for reviewing and issuing an accessibility report for the product we developed, we were able to make the product fully accessible and provided an option to various populations to make predictions and lists by using a keyboard or a screen reader.