In anticipation of the 2018 World Cup and in order to strengthen the tie between Israel’s Toto Winner and the World Cup Winner,  together with the advertising agency Yehoshua/ TBWA, we searched for a concept that could connect viewers at home to the World Cup experience, mixing the viewing experience with social media. In the end, we came to Yehoshua/ TBWA and Toto with an augmented reality filter that we created and told them “you have to take it.”

We created an augmented reality filter for Facebook and Instagram so that users wouldn’t have to install or sign into a third-party app. We brought this filter to the users so that they could take advantage of it also while watching the games. The realistic and impressive filter garnered a lot of attention and created countless collaborations

Watch the video that illustrates the AR effect we created

The filter creates virtual images of various types of make-up combining the flags of selected countries participating in the World Cup on the user’s face while taking selfie photos. We created the facial make-up colors after a research study that we conducted on selected audiences. We took into account the facial colors and make-up samples of people sitting in the stadium audience during the World Cup preparation games.

To complete the user experience, we added the sound of the stadium audience for each team, as well as confetti in the various team colors only when users open their mouth in the selfie picture. We also took into consideration situations where people would enter the camera frame together so that each person wouldn’t have the same identifying filter. Hence, we created additional styles for each team so that if two users came into the camera frame together, each one would have a different make-up style. In this way, they could upload the story together, surprising other users who would then subsequently use the filter with their friends. 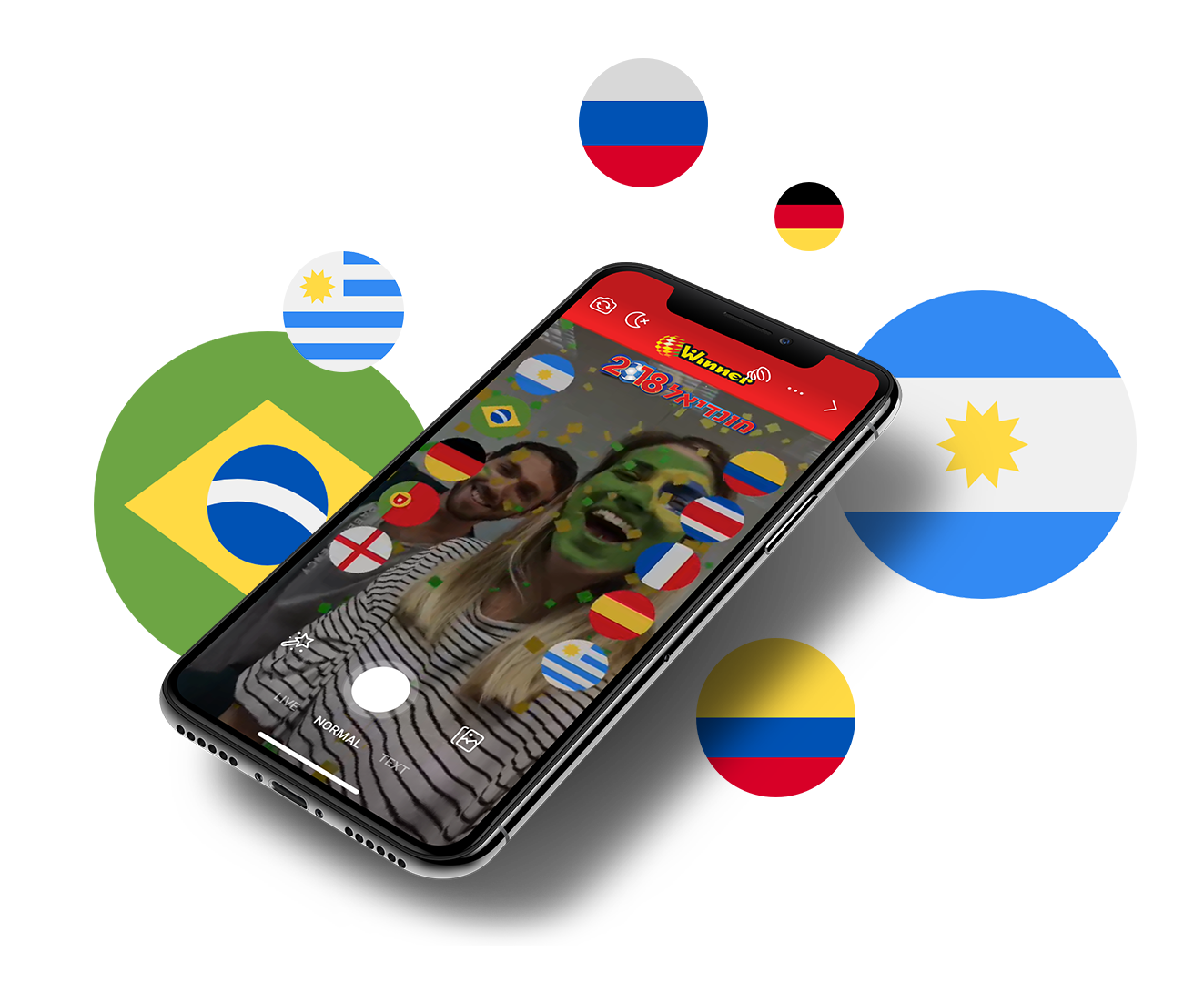 The filter was likely the only one on Facebook concerning the World Cup. It was widely used in Israel and, to our surprise, users around the world stumbled upon it in Facebook’s filters gallery.

Users shared stories of themselves on Facebook and Instagram in which they selected the flag of their chosen country to be designed on their face. Additionally, opening your mouth in the camera enables images of confetti in the chosen team’s colors and roars of fans in the background. The goal was to increase the attractiveness of the content with these effects.

Yael Elmor-Leon, the VP of Online Sport Betting at Toto, stated: “The World Cup is not merely a sporting event - it is much more than that. First and foremost, it is a social experience - and that’s how we view it at Toto. As part of the desire to provide our customers with an unforgettable World Cup experience, we are delighted to have created an empowering social experience through the use of innovative technologies, such as augmented reality, which only enhances the enjoyment of the games.”

Gil Rabbi, CEO of Rabbi Interactive Agency Ltd., stated: “I am happy to see that Israeli brands and marketing executives are beginning to understand that virality has shifted from the feed to the story. We are very excited to give interesting and memorable experiences to World Cup fans, entering these experience both into the arenas of stories and social media networks, with the combination of augmented reality. This is a continuation of the paths taken in recent months where we launched filters for the Israeli Broadcasting Corporation, the Eurovision contest, and the rock performance of the Israeli star Aviv Geffen."

Yigal Barakat, the CEO of Yehoshua/ TBWA, stated: “One of the firm's key tasks is to connect the world of technology and start-ups to classic advertising as part of an overall strategy. The World Cup event is an opportunity to create innovative measures for our Toto customers. Furthermore, we are delighted and grateful for the confidence and opportunities to create a significant technological and digital impact together."