After we developed the technology and the app for the TOUCH TV game broadcast on Keshet the format had the honor of entering the 2016 list of the most intriguing formats at MIP TV conference in Cannes. Following this, Keshet International sold the game show to Caracol, Colombia’s main TV station. The show is broadcast in Colombia every evening during the prime time slot with our technology and in collaboration with Éxito, Colombia’s largest retail network.

Keshet International announced the sale of the format, taking advantage of the diverse nature of TOUCH, which allows numbers usage options. The move was also joined by Grupo Éxito, Columbia largest retail network, which operates food, fashion, electronic, and other stores.

The format changes and the combination with the retail brand led us to create for the Colombian channel its own technological version of the format as we simultaneously worked alongside the two different entities, i.e. Caracol and Grupo Éxito, throughout the process.

TOUCH is a cross-platform game which enables viewers to play at home in conjunction with the broadcasted TV program. The game, developed by Ido Rosenblum, is broadcast in Israel in the format of live breaks in which the at-home participants are required to figure out “what’s wrong with the picture” in a given timeframe, along with the game show contestants.

In the Colombian version, the game format is known as "Rapidamente" and begins every day anew. During the day, participants play on the app and try to find various products of the retail chain brand hidden in different areas in the image. The users must zoom in and out of the image until they accurately mark the hidden product with a long touch.

At a specified time at the end of the day, the ability to play on the app closes and the three participants who were successfully able to identify the products in the image in the shortest amount of time are announced. These same participants are invited to the studio for a live show where they compete against each other. In the end, one of them will win a total of 2000 million Colombian pesos (685K USD).

Caracol has launched an unprecedented advertising campaign, which includes a series of live broadcasts for 15 consecutive evenings during the station’s prime time slot.

Additionally, Éxito has set up areas at all of its branches where visitors can participate in the game as soon as they leave the site. Each compound is photographed by a photography team and led by a game host who interviews the participants on Éxito’s social networks.

Thanks to the massive campaign and Colombia’s large population, we also broke our record of users simultaneously using the digital product. This forced us to monitor the servers in real time and, due to the significant rewards offered each day, we set up information monitoring interfaces so that we would be able to detect and identify any suspicious cyber activities.

Finish shopping at Exito store, and participte in the game (from Exito's Facebook page)

Finish shopping at Exito store, and participte in the game (from Exito's Facebook page)

Unlike the Israeli format, participation in the Colombian version of the game was conditioned only for users with a coupon number which enabled game participation. Viewers could receive the coupon after every purchase over a certain amount at the Éxito retail network.

The technology solution that we created included developing a secure “log-in” mechanism and storing via encryption millions of coupons in the app’s databases. Nearly 50 million people live in Colombia. People can participate in the game multiple times as every purchase at Éxito makes it possible to play. Hence, our estimates have been wide-ranging in combining security testing, load testing, and creating a server system capable of handling millions of users entering during the time of a live broadcast.

In addition to the technology solutions connected to the game, Éxito’s demand was to receive in real time any coupons used directly on their internal systems. Over the course of weeks, all of our efforts were coordinated together with the retail chain’s technology units to ensure full integration between the systems, as well as the necessary security and encryption measures. 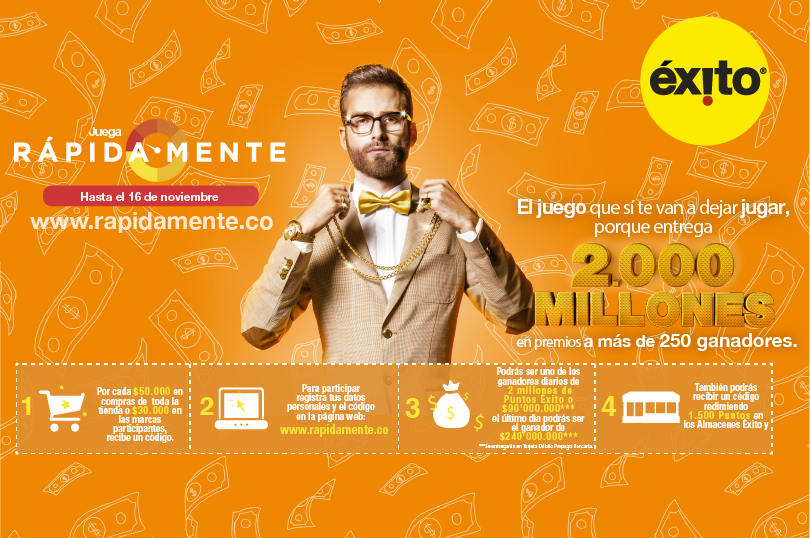 Another challenge facing us was the need to maintain the values of the TOUCH game in order to preserve the experience, but also to successfully brand the game in the graphic language of Éxito.

Beyond game branding, we have been dealing with mobile devices that do not exist in the standard European market. Hence, at times, the screen sizes and device resolutions have forced us to create different interfaces and sometimes to compromise on certain screen elements. During the localization process to Spanish, we used local companies to assist us in the interface translation. Sometimes, we also changed the wording to better suit the Spanish spoken in Colombia.

The Challenge of Real Time

As a company that specializes in developing “real-time” technological products and in accordance with the game technology that we developed in the Israeli format, time synchronization was one the most important challenges in the product development.

At the same time that the program host presents an image on the live TV broadcast, the app simultaneously shows the exact same image and allows the viewers to play. Additionally, in the Colombian version, we added additional mechanisms that allow the operator to shut off game participation at any time. The development was complicated and contained numerous technological implications as we prepared ourselves for situations in which hundreds of users would start seconds before the game closes. Hence, we needed to create a mechanism that alerts users that they cannot continue the game, as well as to stop any possibility of them continuing to play even if they started the game before the closing time.

The interactive game that launched within the Exito branches

The interactive game that launched within the Exito branches