August 23 2017
project goals:
Developing a digital product that will allow viewers in the studio and at home to vote and select their dancer in every program, a dedicated development that enables support for hundreds of thousands of users simultaneously and real-time data transmission

“Masters of Dance”   Keshet’s successful dancing show, was first broadcasted in June 2017 and hosted by Assi Azar and Rotem Sela. The program is divided into the initial audition stages in which the studio judges decide whether the dancer will move onto the next stage, which is a dancing duel. Later on, the viewers at home are ones who decide.

We developed a digital product that goes along with the program from the dancing duel stage all the way until the show’s final episode. During the duel, the studio audience decides and votes in real time for every dance via the digital product that we designed. In the final event, the audience at home participated in choosing Israel’s Dancer and voted with the help of a dedicated app specifically developed to be able to support hundreds of thousands of votes within seconds and backed by the necessary server infrastructure. 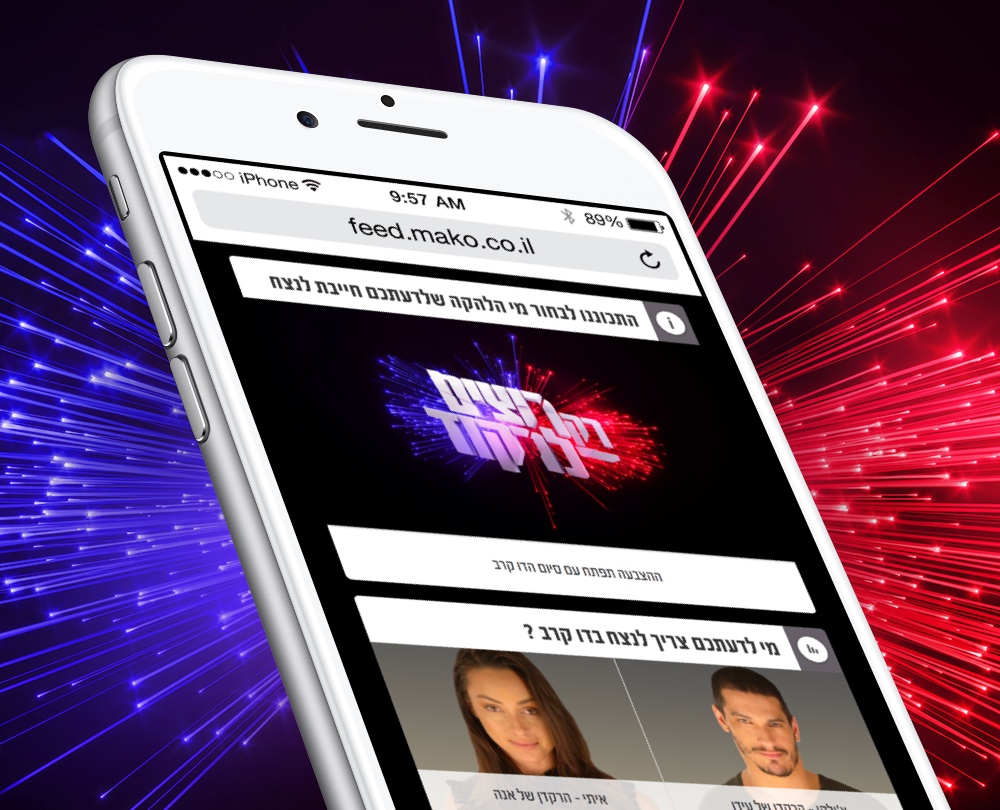 During the broadcast and the voting, the results were presented on the screen thanks to the development of a dedicated mechanism that is able to interface with the broadcasting systems and transmit the data in real time. During the voting for each dance, a synchronizing mechanism was opened, which allowed the audience and the judges to start voting.

In order to develop a digital product for a large TV event broadcasted live, the program operators must have maximum flexibility in the event of unexpected changes. Hence, the push interface that we created allows the program operators to control the opening and closing of the votes via the management interface, enabling real-time reordering and diverse push content for real-time app users in total synchronization with the live broadcast.

The advertisement for the final event

The advertisement for the final event

When setting up products for large TV events in a short time frame, we must prepare for hundreds of thousands of users who sign up at the same moment. Hence, the product development process includes a critical definition, i.e. our product must be “light,” requiring only the minimal amount of resources. In this way, we can support large numbers of users, while operating a limited amount of resources, servers, and environments.

The process of planning and setting up the product infrastructure was carried out while developing the makoplay system that we created,  This is the same system that we developed over a number of years, which enables media bodies to set up operations and get viewers involved in the real-time format

The moment Israel's dancer is announced at the finals event

The moment Israel's dancer is announced at the finals event

The statistical mechanism that we developed allows the production team to check and watch the results at any given time, as well as to execute various segmentations concerning the voting data, including interface reports that allow the data to be exported in various formats of speed..

The smart system that we developed enabled the data to be displayed in real time, while handling the large quantities of votes. Fast and responsive data is required for the winner to be selected and announced. Hence, the system is capable of processing the data in a short amount of time, whereby enabling the Broadcasting Room to view the audience data and select a winner in real time.

The pre-show tutorial video presented to the studio audience

The pre-show tutorial video presented to the studio audience

Unlike other digital products used in TV programs, there is no second chance with this show. The voting process takes a short time and the winner’s announcement cannot be delayed on a live broadcast. For this reason, we conducted rigorous testing, piloting, and simulations of hundreds of thousands of users using the product simultaneously.

In addition to the simulation testing, we prepared for edge cases in advance. For this reason, we developed backup mechanisms in the event of server crashes or failures, saving data to multiple service centers with the ability to store data and votes even in cases of exceptionally large loads and edge case problems.