When Hezi Lahav, an anonymous young man, arrived at our office for our first meeting, we didn’t understand why he came to us. Hezi told us that he was working on his first song and was looking for an original way to release it. When we heard the song, we were very moved, and realized that everyone connected it to their own world and personal experiences, and so we wanted to allow viewers to take part and express their feelings. This is the way the concept and a unique strategy was created – one that would be discussed throughout the Israeli media in just a few days.

A short film about the project and the process

We designed a campaign that integrated the production of a music video with the creation of a viral activity in social media. We cast the actor, Natalie Dadon, and chose the director, Indi Hayat, one of the young, perspective directors in the Israeli scene, and set a date for shooting. We started shooting at sunset among the sand dunes of Holon, and after 17 busy and fun hours returned to the studio in Tel Aviv. We then started to work on the activity. 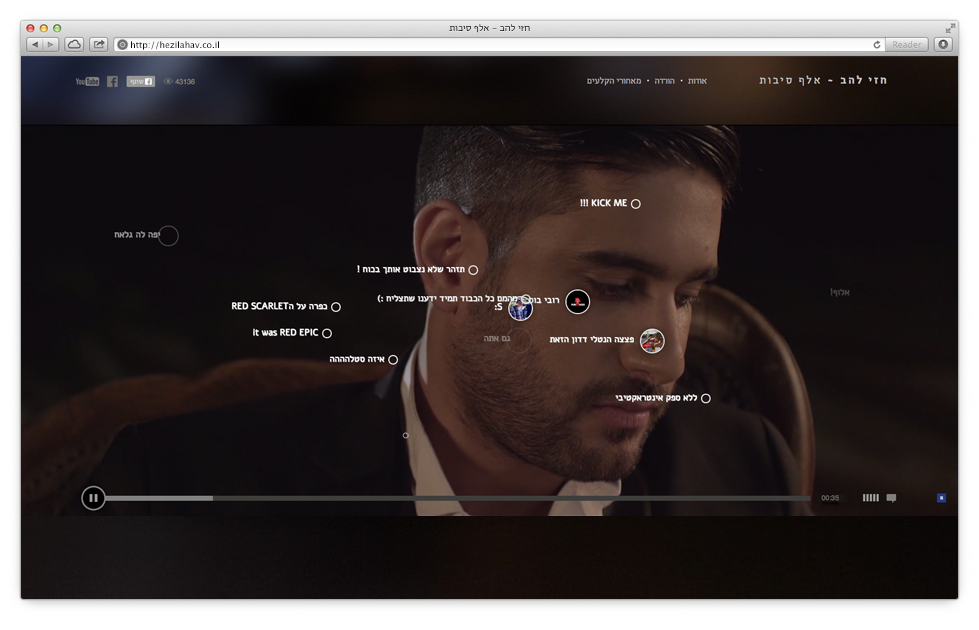 Users` comments presented on the video

We created a very specialized mechanism that allows viewers to respond to the music video using a Facebook account. They could choose any location on the video and share their feelings and thoughts. Shares appeared during the original time and place while the clip was being watched, which created an interesting collection of responses that referred to what was being shown.

The concept interested music fans and garnered thousands of views and responses even within the first week. Israeli media was not indifferent, and Hezi received broad exposure on radio, TV, as well as in printed and online news.

Radio Announcers responses for the clip

Within one week more than 110,000 people had viewed the video. Hezi received 5.5 million views on Facebook, of which one third came via viral exposure. Within the first week 25,000 people were active on Hezi’s Facebook page. There were 94 plays on 17 different radio stations, within the first 5 days.

`Behind the scenes, Hezi Lahav `One Thousand Reasons

The interactive clip. There were 94 plays on 17 different radio stations, within the first 5 days

Hezi Lahav and Natalie Dadon during the clip`s filming